As a Kennel Club Assured Breeder I am interested in breeding a Labrador that not only has great working ability, a kind patient temperament and good conformation but is also a healthy animal. All our dogs have gone through extensive health testing including the following,

BVA/KC Eye Test - The main purpose of the scheme is to ensure that there is no evidence of hereditary eye disease in dogs used for breeding. Breeders are often advised to submit dogs for annual eye tests, since some diseases have late onset of clinical signs.

Hip Scoring – Hip Dysplasia means abnormal development, and the degree of hip dysplasia present is indicated by a score assigned to each hip. The hip score is the sum of the points awarded for each of nine aspects of the X-rays of both hip joints. The minimum hip score is 0 and the maximum is 106 (53 for each hip). The lower the score the less the degree of hip dysplasia present.

Elbow Scoring -  The term Elbow Dysplasia (ED) can be used to describe a number of specific elbow abnormalities which affect different sites in the joint. The grading system is simple: 0 = Normal  1 = Mild ED  2 = Moderate ED or a primary lesion  3 = Severe ED.

The OptiGen (PRA) test is a DNA-based test that helps you avoid one form of Progressive Retinal Atrophy (PRA). PRA refers to a group of diseases that cause the retina of the eye to degenerate slowly over time. The result is declining vision and eventual blindness. “prcd” stands for “progressive rod-cone degeneration” which is the type of PRA known in several breeds.

​Centronuclear Myopathy (CNM) test is a DNA- based test that helps you avoid CNM which typically manifests in puppies at 2-5 months.  Signs of CNM include: generalised loss of muscle tone and control, exercise intolerance and an awkward gait.

Exercise Induced Collapse (EIC) test is a DNA based test that assists in avoiding EIC which show can first be detected at 5 months old. Affected dogs show signs of leg weakness followed by complete collapse after 15-20 minutes of exercise.

Skeletal Dwarfism (SD2) test is a DNA based test that helps breeders to avoid the genetic disease found in labradors that causes an early halt in growth of long bones. The result is dis proportioned dogs with shortened  limbs. 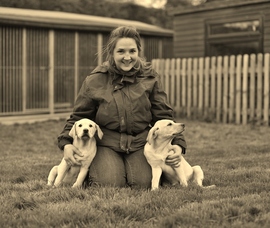